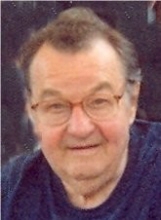 MERIDEN - Joseph G. (Bud) Kiely, 83, of Meriden, beloved husband of Gene (Piatek) Kiely, passed away peacefully, with his devoted wife and loving family by his side, Thursday, Nov. 10, after a lengthy bout with Progressive Supranuclear Palsy. Born Jan. 13, 1928, to the late Joseph M. and Agnes Kiely, Bud resided in Meriden his entire life, attending St. Mary Elementary School and graduating from Meriden High School in 1945. He enlisted in the U.S. Navy near the close of World War II, serving aboard the U.S.S. Huntington as that cruiser supported post-war operations at a number of Mediterranean ports. He was chiefly responsible for maintaining and operating the ship's boilers. After being honorably discharged in 1949, Bud returned to Meriden, marrying Gene in 1950. His engine room experience helped him land a job at New Departure Hyatt in Meriden (later in Bristol) and support his children through braces, college and weddings. He retired in 1987. Bud thoroughly enjoyed his retirement as he and Gene made several cross-country trips, traveled abroad, and visited frequently with family and friends. His children will remember him always as a lover of nature and a truly devoted family man who took them on day-long trips to ride the waves at Misquamicut, on early morning swims at Beaver's Pond ('before the water gets muddy'), on hikes at Hubbard Park and for Sunday, back-yard cook-outs, among many other fondly remembered events and excursions. He was a parishioner of St. Mary Church. Besides Gene, he is survived by their 10 children and their spouses, Joseph (Buddy) Kiely, Jeanne Kiely and Drew Maciag, Judy Kiely and Philip Rieth, Diane and Kevin Mischke, Marianne (Mimi) and Ed Heath, Tom and Candace Kiely, Nancy and Bill Bobskill, Kathy Kiely and Bob Perruccio, Robert Kiely, Holly and Joe Ludemann; his sister, Maureen Palladino; his brother, Edward Kiely; his brother and sister-in-law, James and Shirley Kiely; 17 grandchildren; 3 great grandchildren; several nieces and nephews. Besides his parents, he was predeceased by his sister-in-law Carol Kiely. The family would like to thank Britney Monroe for her compassion in assisting Gene with her husband's care. They also offer their thanks to VITAS Hospice for their kindness, care and support. Relatives and friends are invited to attend a Mass of Christian Burial on Tuesday, Nov. 15th, at 10:30 a.m. at St Mary Church, Church Street, Meriden. Burial with Military Honors will follow at Walnut Grove Cemetery, Meriden. Calling hours are from 4 to 8 p.m., Monday, Nov. 14th, at BEECHER & BENNETT- FLATOW FUNERAL HOME, 48 Cook Ave., Meriden. In lieu of flowers, donations in memory of Mr. Kiely may be made to CurePSP: Foundation for PSP, 30 E. Padonia Road, Suite 201, Timonium, MD 21093.