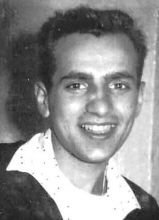 Joseph L. Marcucci, Jr., age 80, passed away on April 11, 2017. Born in New Haven on April 22, 1936, he was a son of the late Joseph L. & Josephine Marcucci, Sr. Joseph was the father of Joseph L. Marcucci III & his wife Kelli of Woodbridge and James Marcucci & his wife Jennifer of Hamden; and grandfather of Whitney, Brandon, & Madison Marcucci and Colin Bradley, and Brother of Louise Battista of New Haven & Catherine Cosenza of West Haven. He was predeceased by brothers Alphonse & Frank Marcucci. A lifetime NY Yankee and Giants fan, he greatly enjoyed watching both teams over the years. He was a U.S. Army Veteran and a salesman/manager for all his life, employed many years by Servomation, S & H Green Stamps, and the Wise Potato Chip Co. Friends may attend his Funeral Service with Military Honors on Friday, April 21, 2017 at 12:00 noon at the State of CT Veteran Cemetery, 317 Bow Lane, Middletown, CT. Arrangements are in care of Beecher & Bennett Funeral Home, 2300 Whitney Avenue, Hamden. In lieu of flowers contributions in Joseph's memory may be made to the American Heart Assoc., 5 Brookside Dr., Wallingford, CT 06492.