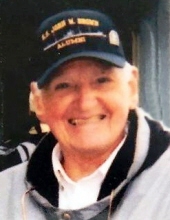 Joseph L. Paoli, 89, of Meriden, passed away at Westfield Manor on February 11, 2019. He was predeceased by his loving & caring wife of 63 years, Eva Clark Paoli. Joseph will be remembered by his daughters, Eva Marie Priola of Suffield, Jennifer Beegan & her husband Kevin of Meriden; son, Joseph & his wife Cheryl of Meriden; grandchildren, Brandon & Keith Priola, Michael, Tyler, & Dalton Kamens, and Cassandra Paoli; great- grandchildren Jackson, Berkeley, & Celina Priola; brothers Robert & his wife Diane Paoli, and Albert Paoli, as well as over 30 nieces & nephews. He was predeceased by siblings Arnold Paoli and Millie Devivo. Joseph was born in New York, NY on November 14, 1929 to the late Arnold and Aida Paoli. He graduated from the first class of the Maritime ship John W. Brown at age 18, and in 1947 went to sea with the Maritime service. He sailed all over and received his license from Sheepshead Bay Maritime School after 15 different ships, mostly tankers. After joining the U.S. Army in 1953 he served with the 159th Amphibious Boat Battalion. Joseph's love of the sea remained with him, as he became a member of the Project Liberty Ship and Sail on the Brown during living history cruises. He is past Exalted Ruler of Meriden Lodge 35, as well as past District Deputy, State President, Trustee, Secretary, and Officer of the Year. As a member of the Antique Veterans, he was very proud of this dedicated group. He was an avid Mets and Jets fan and worked in the Maritime Industry, and retired from J.C. Penney. His family wishes to thank Westfield Manor for their loving and tender care of their father. Funeral from BEECHER & BENNETT-FLATOW FUNERAL HOME, 48 Cook Ave, Meriden on Friday, February 15th at 11:00 a.m. followed by a Mass of Christian Burial to be celebrated in St. Rose of Lima Church at 11:30 a.m. Burial with Military Honors will follow in the State Veteran's Cemetery, Middletown. Friends are invited to visit with Joseph's family on Thursday, February 14th from 5:00 to 7:00 p.m. in the funeral home. Contributions in his memory may be sent to the Antique Veterans, c/o Meriden Senior Center, 22 West Main St., Meriden, CT 06451. To send a condolence to the family please see obituary at www.beecherandbennett.com.