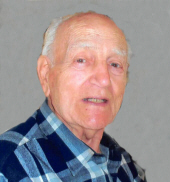 Joseph Louis Festa, 92, of Hamden, CT passed away on Thursday, April 9, 2015. Joe was married to his beloved wife Mary LaPorta Festa on April 12, 1947, she predeceased him in September 2011. Born in New Haven on February 9, 2913 he was a son of the late Antonio & Venchenza Ruggiero Festa. He was predeceased by his 10 siblings. Joe was a graduate of Troup Junior High and Hillhouse High School in 1941 where he played football there for 4 years, He was a US Army Veteran of WWII. Joe started out as a Heavy Weight Fighter and later became a Security Guard at Pratt & Whitney in North Haven. He retired there in 1975 after 31 years of employment. He was an avid sportsman with loves such as hunting, fishing & football; however his true love was horseshoes. He was a past member of the Connecticut Horseshoe Pitchers Association; he played in many tournaments both local and away such as New England Championships. Joe was a 1994 Hall of Fame Inductee, organizer and player from 1969 to 1988. He had 5 second places in a row in Class A State. In 1979 he took 1st place in the New England Tournament, Class B. Joe loved the outdoors and his dogs, all German Schnauzer and all named 'Bootzy'. He was a longtime friend of Leonard Dorman of Hamden, and Godfather to Robert J. Ruggiero for over 72 years. He liked to be called 'The Champ'. Joe will never be forgotten. When he was a teenager he would hunt & fish with Robert in Bayview, Milford, CT. Joe's funeral will be held on Tuesday, April 14th at 9:00 AM from Beecher & Bennett Funeral Home, 2300 Whitney Ave, Hamden, followed by his Mass of Christian Burial to be celebrated at 10:00 AM in Our Lady of Mt. Carmel Church. Burial will take place in St. Mary's Cemetery, Hamden. Friends may also visit with his family at the funeral home on Monday from 5:00 to 8:00 PM. Donations in his memory may be made to his church, Our Lady of Mt. Carmel, 2819 Whitney Ave, Hamden, CT 06518.