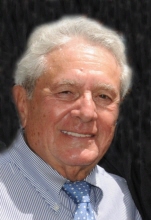 Mr. Joseph P. Parise, Jr., age 83, husband of Evelyn Neri Parise of Hamden, passed away on October 1, 2017 after a brief illness. Mr. Parise was born in New Haven, Connecticut on July 15, 1934, the son of the late Fillippa Anna Porrello and Joseph Paul Parise. He grew up on William Street with many of his family nearby. He attended St. Boniface Elementary School and was a graduate of St. Mary's Academy. He then attended the Stone School of Business. Joseph began his career with the National Biscuit Company, and then spent 33 years with Carnrick Laboratories, where he was the Regional Director for the Northeast Region. Since retiring he enjoyed his gardens and golf, and watching his grandchildren grow up. He never missed an opportunity to attend a sporting or musical event, enjoying each and every accomplishment of his beloved grandchildren. His granddaughter Ashley said upon his passing that 'he was the greatest grandfather, he loved us so much and showed us that love every day.' His greatest passion, however, was that which he shared with his wife of 63 years Evelyn. In addition to his wife, Mr. Parise is survived by his daughter Pamela Parise Suan and her husband Dr. Eric P. Suan of Baltimore, MD, and a son, David Paul Parise and Karin Klarades Marinaro of East Haven, CT, three grandchildren, Preston Suan, Ashley Suan, and Savannah Parise. He is also survived by sister, Joanne Lauber of Cheshire, CT, as well as many other relatives and friends. Friends may attend his funeral on Monday, October 9th, at 9:00 AM from BEECHER & BENNETT FUNERAL HOME, 2300 Whitney Ave., Hamden, followed by his Mass of Christian Burial at 10:00 AM to be celebrated in Our Lady of Mt. Carmel Church, Hamden. Friends may also visit with his family at the funeral home on Sunday from 4:00 to 7:00 PM. Interment will take place in St. Mary's Cemetery, Hamden. Contributions in his memory may be made the American Lung Association at www.lung.org.