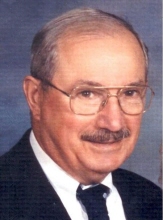 Joseph Roger Calistro, 94, of Woodbridge entered into peaceful rest at his home on Feb. 2, 2017. He was the beloved husband of Virginia 'Miss Ginny' Butler Calistro. He was born in New Haven Sept. 23, 1922, a son of the late Domenick and Mary Desiderio Calistro. He had resided in Woodbridge since 1960. Mr. Calistro retired from American Cyanamid Co. after thirty years of service as a project manager on local and overseas projects. He proudly served in the U.S. Air Force during WWII as a navigator on a Flying Fortress (B17) flying 35 missions over Germany with the Bloody 100th Bomb Group. Joseph graduated with distinction from the University of Connecticut with a degree in Mechanical Engineering. He served as Republican Town Chairman for many years. He was a long-time member of the Woodbridge Board of Selectmen and served for several years as Deputy First Selectman. Joseph spearheaded the Building Committee for Woodbridge's new firehouse. He was instrumental in the renovation and reconstruction of the Woodbridge library, and he was intimately involved in the development of the recreational infrastructure of the town, as the force behind building new soccer fields, tennis courts, and preserving open space. Joseph was a longtime member of the Woodbridge Lions Club, the Woodbridge Land Trust and the American Chestnut Foundation. He was also a Mason. He was a tireless advocate for the very best traditions of the Town of Woodbridge, working across political party lines to make Woodbridge a better place to live. He loved his country, his community but above all, he loved and was proud of his family. As the loving husband of 'Miss Ginny' Joseph was known over the course of many years to hundreds of Cabbage Hill Country Day School preschoolers as 'Papa Joe.' He was the proud father of Virginia Deborah Culligan (Patrick Culligan, loving and devoted caretaker) of Woodbridge, Roger Calistro (Kathleen Foster) of Meriden, and Cara Calistro (Ollen Dupree) of Bowie, Maryland. Brother of Eugene Calistro of Branford. 'Papa Joe' is also survived by his 8 grandchildren: Rachel Acevedo (Victor Acevedo), Joseph (JP) Culligan, Daniel Culligan, Casey Culligan, Dominic Calistro, Virginia Calistro, Mya Dupree, Elijah Dupree, and his great-grandchildren Nathaniel and Adrianna Acevedo. He was predeceased by a brother, Frank Calistro, and a sister, Lillian Lehane. Calling hours will be held at Beecher and Bennett, 2300 Whitney Ave., Hamden from 4:00 p.m. to 8:00 p.m. on Friday, February 10, 2017. A memorial service will be held on Saturday, February 11th at 11:00 a.m. at the First Church of Christ, Meetinghouse Lane in Woodbridge. In lieu of flowers, donations may be made to the Woodbridge Land Trust, PO Box 3699 or the Woodbridge Town Library, 10 Newton Road, both located in Woodbridge CT, 06525.