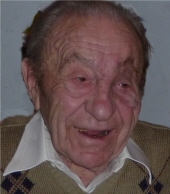 At the CT Hospice, Joseph Rascati, 95, of Branford, peacefully passed away on September 29, 2011 surrounded by his family. He is survived by his loving wife, Maryann E. Bonitata Rascati. Devoted father of Marygrace (Nick) Pacelli of Northford, Marla (Alan) Morris of Hamden, and Russell (Moira) Rascati of Old Orchard Beach, ME. Brother of Laura Carlson of Hamden. He also leaves 2 stepsons, Dan (Vivian) Bonitata of Madison and Mark (Lori) Bonitata of Auburn, CA, 6 grandchildren, 5 great-grandchildren, 4 step-grandchildren and 2 great step-grandchildren, along with many wonderful nieces and nephews. He was predeceased by his first wife, Mary E. Rascati, and his two sisters, Jessie R. Carlson and Rita R. Moomjian. Joseph was born on Dec. 8, 1915, a son of the late Louis and Margaret Ardolino Rascati. He was a US Navy veteran and proudly served during WWII. After the war, he returned home to help run the family business, Rascati's Market on Shelton Ave. in New Haven, with his father, which eventually, he would co-own with his brother-in-law, Carl (Dick) Carlson and sister, Laura, until their retirement in 1980. Joe was an avid boater and fisherman, and spent so many of his happiest times out on Long Island Sound with his family and friends, and was always happy playing a good game of pool as well. Friends are invited to gather with the family on Fri. Oct. 7, from 5 – 7 p.m. at BEECHER & BENNETT, 2300 Whitney Ave., Hamden. A mass will be celebrated at St. Mary's Church in Branford, on Sat. Oct 8, at 11 a.m. Burial will be private at the convenience of the family. The family has requested that in lieu of flowers, memorial contributions be made to either, CT Hospice, 100 Double Beach Rd., Branford, 06405, or Juvenile Diabetes Research Foundation 2969 Whitney Ave., Hamden 06518.