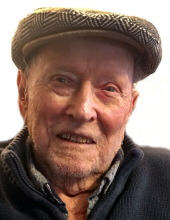 Joseph T. Rahl, Sr., 95, Hamden Fire Dept. (Ret.), loving husband of 69 years to June Coomes Rahl, passed away on December 23, 2019 at his home in Hamden surrounded by his family. He was born in New Haven on September 6, 1924, son of the late Joseph P. and Mabel Norton Rahl. Besides his wife June, he leaves his children Kathleen Nicholson and her husband Michael of Guilford and Bill Rahl of Hamden, brothers; Donald and Michael Rahl, sisters; Joan Vogel and Patricia Filbert and her husband David, grandchildren; Annie Nicholson, Brian Nicholson and his wife Meagan, Ned Nicholson, Jennifer Dray and her husband Brian, Michelle Rahl (Rollin Mondo), great-grandchild Sophia Mondo, and daughter in law Mary Ann Rahl. He is predeceased by his son Joseph Rahl, Jr. and granddaughter Elizabeth Nicholson. Joseph honorably served in the Army during WWII in the Pacific from 1943-1946. He then went on to become a Hamden firefighter for over 30 years until 1989, and before that he was a Mt. Carmel volunteer firefighter for many years. Joseph also worked for John H. Nolan Hamden Monument Company for many years until his retirement. He was a proud member of American Legion Post #88, and enjoyed hunting, and fresh and saltwater fishing. He loved his black labrador retrievers Bandit and Ranger, but above all else, he cherished the time spent with his family, especially his grandchildren. Joe was always there first to help anyone in need. We will all dearly miss him. Friends are invited to visit with Joseph's family on Friday, December 27 from 5-7 p.m. in BEECHER & BENNETT Funeral Home, 2300 Whitney Ave. Hamden. A service celebrating his life will be held in the funeral home on Saturday, December 28 at 11 a.m. Interment with Military Honors will follow in Centerville Cemetery. Memorial contributions in his name may be made to The Alzheimer's Association, 225 N. Michigan Ave. Fl. 17, Chicago, IL 60601, www.alz.org.