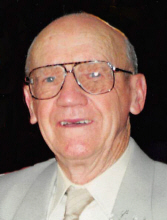 Joseph Timothy Whalen, Sr., 96, of Hamden, husband of the late Ethel Anderson Whalen, passed away peacefully at his home on January 18, 2015. Born in Millville, MA on August 14, 1918 to the late Philip and Catherine Flynn Whalen. Joseph will be remembered by his son, Joseph T. Whalen, Jr. of Hamden and his daughter, Linnea Whalen of Milford and her fiancée Ronald Duhaime. During WWII Joseph was a Sergeant in the U.S. Army, was a two time Purple Heart recipient, and a Bronze star honoree. After his time in the service, he was simultaneously, the police Chief and the fire Chief in Millville, MA. He and his wife moved to Hamden in 1948 where he worked for A.C. Gilbert before retiring from Knudsen Bros. Dairy. Joseph was a member of the American Legion Post 88 and the Purple Heart Society. Friends are invited to visit with his family on Friday, January 23rd at BEECHER & BENNETT, 2300 Whitney Ave, Hamden, from 9:00 to 10:00 with a Funeral Service in the funeral home at 10:00 a.m. followed by a burial with Military Honors in All Saints Cemetery. Contributions in Joseph's memory may be sent to the charity of your choice.