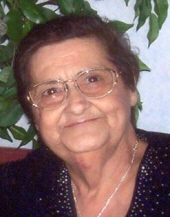 Josephine G. Fritz, 71, of 121 Noble St., West Haven, passed away Friday, April 13, 2007 at St. Raphael's Hospital. She was the wife of the late Paul Fritz, W.H.P.D. She was born in New Haven, September 2, 1935 daughter of the late John "Tuffy" and Mary Masiello Giordano. Mrs Fritz was the supertendent of the Hilltop Terrace Apartments for the past 30 years. She is survived by daughters Deborah Douglas and David of West Haven, Mary Gagliardi of Middletown, and Antionette Gagliardi and Salvatore Fiorillo of West Haven and Louise Ann Way of West Haven. Also survived by 3 grandchildren. She was predeceased by her first husband Joseph Gagliardi. Friends may call at BEECHER & BENNETT TAYLOR Funeral Home, 410 Campbell Ave., West Haven on Monday April 16th from 5-7 p.m. Funeral Service will follow at 7 p.m. Interment will be private.