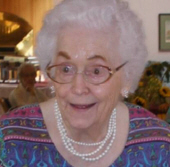 Josephine Regina Feustel, beloved mother of Michael Edward Feustel of Satellite Beach, Florida and Mary Ellen Feustel of Swarthmore, Pennsylvania died peacefully Thursday, July 25, 2013 at Whitney Center retirement community in Hamden, Connecticut. 'Jo 'was born July 8, 1918 in Brooklyn, New York to Josephine Jablonksi and Adolf Smigelski. Jo as a young woman worked as a secretary for the International Brotherhood of Electrical Workers in New York City. It was there she wrote a column 'So They Say' and met Eleanor Roosevelt as she toured the union offices. Jo worked at Camp Livingston in north Louisiana during World War II. It was there she met John Feustel and married him in October 1945. Jo was for many years a stay at home mom and returned to work as a secretary for the Episcopal Ministry at Yale University and later for the Connecticut Mental Health Center in New Haven, Connecticut. Jo was an advocate for the homebound spending time reading and bringing books to those unable to leave their homes. She was a past Vice President of the New Haven League of Women Voters, served on the board and participated in the Institute for Learning in Retirement classes, Toast Masters, democratic political activities, was a Legion of Mary volunteer, and a member of St. Rita's Parish in Spring Glen region of Hamden, Connecticut. Jo was an avid reader and would read by flashlight late at night. She would eventually read the entire collection of books at her local library while her parents thought she was sleeping. Jo loved attending 'Sandwich with a Book' discussions, attending Long Wharf Theatre productions, museums, stimulating discussions and programs at Whitney Center, vacations in Wellfleet, Massachusetts, and exploring state parks throughout Connecticut. As macular degeneration caused her to lose her vision and become blind, Jo enjoyed audio books supplied by the Library for the Blind. Jo is predeceased by her sisters Frances Graff and Janet Rojeck. She is survived by her five grandchildren Alex, Ethan, and Ian Chideckel, Matthew Feustel, and Jessica White. She is survived by one great grandson, Gage White. Friends may visit with her family on Saturday, July 27, 2013 from 8:00 to 8:30 AM at BEECHER & BENNETT FUNERAL HOME, 2300 Whitney Ave, Hamden and may attend her Mass of Christian Burial at 9:00 AM in St. Rita Church, 1620 Whitney Ave, Hamden. Interment will follow in St. Bernard Cemetery, New Haven. In lieu of flowers contributions can be made in her memory to: Library for the Blind and Physically Handicapped, Connecticut State Library, 198 West State Street, Rocky Hill, Connecticut 06067 or to the National Institute on Aging, Budget Officer, Financial Management Branch, Bldg 31, Room 2C-06, 31 Center Drive, MSC 2292, Bethesda, MD 20892-2540. Please indicate that the contribution is for Alzheimer's research and education.