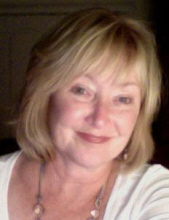 Joyce Anne Wallace Basilone, 63, died on the afternoon of December 18, 2014 after a year and a half battle with small bowel cancer. She was born to parents Raymond and Evelyn Kompare Wallace and was raised in the Penn Hills area of Pittsburgh, Pennsylvania. She was the eldest of nine children. Her father died when she was five, and her mother remarried Joseph Woods. She was a successful recruiter and a top sales person for companies like Westinghouse Credit and Sprint. She sat on the board of the Pittsburgh City Theater, and was the president of a Zonta chapter for years. In 2006 she moved to Hamden, CT. She had a zest for travel, was an avid supporter of the theater and loved movies (the Before Sunrise trilogy especially). She is survived by her husband, Russ Gieselman; her son, Stephen; her seven siblings, Dan, Bud, Lynn, Mike, Mary Jo, Kelly and Joe and her three dachshunds. Those are the facts of her life, but they don't give the full picture. They don't tell you that she was fearless. That she was stubborn. That she had a quick wit, was an excellent writer, and was the warmest, kindest, most giving person you'd likely ever meet. She inspired people with her elegance, was a first-rate host, and made the best damn stuffing you'll ever eat. Hers was a light that shone brightly on many. She (and her stuffing) will be missed. Friends and family are invited to Services for Joyce, one to be held in Connecticut at 2:00 p.m. on Tuesday, December 23rd at the Naumann Gallery, 279 Branford Rd. – Rte 139 – Branford, CT and in the South Side of Pittsburgh at 1:00 p.m. at the City Theater on Saturday December 27th, her 64th birthday. BEECHER&BENNETT, 2300 Whitney Ave, in care of arrangements.