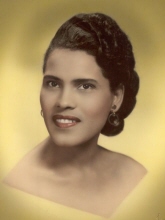 Plymouth- Juanita Verdell Johnson, of Mt. Tobe Rd., passed away unexpectedly at her home on Tuesday, July 25. She was born March 17, 1927 in New York City, NY a daughter of the late William E. and Ernestine (Steele) Johnston Sr. She is retired from SNET after many years as a supervisor. Juanita was a member of the Christ C.M.E. Church of Waterbury where she was vice president of their Willing Workers. She was also an LPN who worked for several area home care organizations as well as private duty. She was a devoted and compassionate mother, grandmother and sister who will be very deerly missed. She is survived by three daughters, Juanita Johnson of Waterbury, Arianna and Tia Johnson of Plymouth, four sons, Michael Joyner of Las Vegas, NV, Narvie and Eric Johnson both of Illinois, and Niles Johnson of California and one brother, William E. Johnston of New Haven. She also leaves ten grandchildren, Cameron Johnson, Lance Trotman, Brandon Trotman, Chaz Pitts, Georgio Nieves, Levonte Cooper, Narvie Cooper, Valerie Johnson, Devol Joyner and Andre Joyner as well as many nieces nephews and cousins. Juanita was predeceased by a daughter, Tonya Johnson, three sons, Russell, Andre and Devol Joyner, a sister, Joyce Gatling and a brother, Edward J. Johnston. Funeral services will be held on Monday, July 31 at 11:00 a.m. at the Christ C. M. E. Church, 32 Maple St., Waterbury. Burial will follow at Hamden Plains Cemetery, 246 Circular Ave., Hamden, CT. Relatives and friends may call at the church on Monday from 9-11:00 a.m. prior to the service. The Beecher & Bennett Funeral Home, 2300 Whitney Ave., Hamden is in charge of the arrangements.