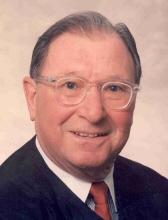 In New Haven, March 28, 2009. Donald W. Celotto of Woodbridge. Husband for 43 years of the late Elizabeth Schmitz Celotto. Father of Donald W. Celotto, Jr. of Woodbridge and Elizabeth Celotto and her husband, Robert Glick, of Teaneck, N.J. Brother of Alberta Harrington of Jupiter, FL and Amelia Mongillo of Narragansett, RI. Grandfather of Nicholas and Alexander Glick and Rachel Celotto. Brother of the late Robert Celotto and Frances Keating. He was the beloved friend of Mary Lacey, also of Woodbridge, and her entire family. Born in New Haven on October 19, 1923, he was the son of the late Dominic and Elizabeth Leopold Celotto. He attended Hillhouse High School and Phillips Academy, graduating from Yale University in 1948. He served in the U.S. Army Infantry during WWII in Belgium where he fought and was wounded in the Battle of the Bulge and, thereafter, in Germany. He also served in the post-war occupation of Germany, as a 2nd Lieutenant. He was decorated with the Purple Heart and two Bronze Stars. Donald was a graduate of the University of Connecticut Law School. In March of 1974, he was appointed a Judge of the Court of Common Pleas, and thereafter, named a Judge of the Superior Court. At the time of his death, he was a Judge Trial Referee of the Superior Court. He was a Past President of the New Haven County Bar Association and The Connecticut Judge's Association. Judge Celotto served as a Director/ Committee member for many organizations: St Aedan's Parish Council, Day Prospect-Hill School, a Fellow of Jonathan Edwards College, The Community Foundation of Greater New Haven, Connecticut Republican State Central Committee, and New Haven Republican Town Committee. To all who knew him, he was a devoted and loving husband, father and grandfather; a lawyer and a judge dedicated to the very best traditions of advocacy, jurisprudence and justice; a loyal alumnus of Yale University; a passionate student and player of the game of baseball; and, a life-long fan of the New York Yankees. Funeral from BEECHER & BENNETT, 2300 WHITNEY AVE. HAMDEN on Thursday, April 2, 2009, at 9:00AM, followed by a Mass of Christian Burial at 10:00AM in the Church of the Assumption, Woodbridge. Friends may also visit with his family at the funeral home on Wednesday from 4 - 8 P.M. Interment will take place in Eastside Burial Grounds, Woodbridge. Donations in his memory may be made to the charity of one's choice.