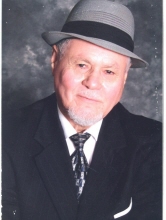 Meriden- Julio E. Muniz, 81, beloved husband of Raquel (Gonzalez) Muniz passed away on Thursday, November 27, 2014 at MidState Medical Center. He was born November 24, 1933 in Moca, Puerto Rico a son of the late Elias and Nila Muniz. Julio graduated in 1999 from Liberty University with a degree in Theology. He retired as a Barber and then dedicated the last 20 years of his life to pastoral and volunteer care at many local hospitals and nursing homes. In addition to his wife he is survived by two daughters; Lillian and Barbara (Manuel),four sons; Jose(Maritza), Julio Jr.(Maria), William (Helen) and Irving (Tracy), fourteen grandchildren and man great-grandchildren. He also leaves a brother, Paulino as well as many nieces and nephews. He was predeceased by a son Larry, sister, Gracia and four brothers, Benjamin, Alex, Junior and Nelson. A mass of Christian burial will be celebrated on Monday, December 1, 2014 at 10am at St. Stanislaus Church, Olive St., Meriden. Everyone is asked to meet directly at the church. Burial will follow at Walnut Grove Cemetery. Relatives and friends may call at the Beecher & Bennett-Flatow Funeral Home, 48 Cook Ave., Meriden on Sunday, November 30 from 2-6 p.m.