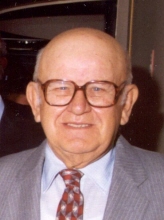 Bogacki, Julius 'Chick' J. Julius 'Chick' J. Bogacki, passed away April 24, 2008, at his home in Hamden. Chick was the husband of Dorine Dady Bogacki; father of Karen and her husband Joseph Lucisano of Milford and Joseph and his wife Genny Bogacki of Cheshire; beloved grandfather of Danielle, Kristen and Jeffrey Lucisano and brother of the late Frank and Stanley Bogacki and Irene Godalis and Annie Hitchcock. Born in Branford, CT on Jan. 22, 1922 he was a son of the late Julius and Veronica Mytyck Bogacki. Chick was a US Army Veteran of WWII. He was a retired plumber for the former Sargent Lock Co. in New Haven. Chick was an avid sports fan and loved to garden and fish and enjoyed his time with his family. Funeral will be held from BEECHER & BENNETT, 2300 Whitney Ave., Hamden, Monday at 9 AM, with a Service at 10 AM in Hamden Plains United Methodist Church, burial with Military Honors will follow in Beaverdale Memorial Park, New Haven. Friends may call at the funeral home Sunday from 4 to 7 PM. Memorial Contributions may be made to Hamden Plains United Methodist Church-15 Church St. Hamden, CT 06514 or to the VNA- 1100 Sherman Ave., Hamden, CT 06514 or to Conn. Hospice - 110 Barnes Rd., Wallingford, CT 06492.