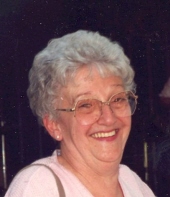 Bristol - June A. Bonviso, 76, wife of the late Anthony Bonviso died on Sunday, December 26, 2010. She was born June 22, 1934 in Meriden a daughter of the late Edgar and Theresia (Ell) Brenner. She was a member of First Baptist Church where she was a deacon and former chairperson of the Mission Board. June worked for Holgrath Manufacturing and enjoyed volunteering at the Soup Kitchen and the Homeless Shelter. She is survived by three daughters; Susan Schrijn and her husband Jeffrey of Bristol, Diane Bonviso of Florida and Patricia Bonviso of Southington, a brother; Walter Brenner of Meriden, several counsins, a brother-in-law, sisters-in-law, nieces and nephews. A funeral service will be held on Thursday, December 30, 2010 at 10:00 a.m. at the Beecher & Bennett-Flatow Funeral Home, 48 Cook Ave., Meriden. Burial will follow at Walnut Grove Cemetery. The Rev. Charles Redfern will officiate. Relatives and friends may call at the funeral home on Wednesday, December 29 from 4-7 p.m.