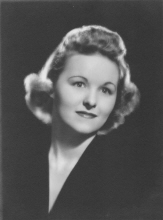 June McNutt Robinson, resident of North Branford, formerly of North Haven, died peacefully on August 2, 2013 surrounded by her family. She was born in Detroit, Michigan on May 31, 1924 as the daughter of the late John and Christine McNutt. She grew up in Ann Arbor, Michigan and graduated from Michigan State University. She worked for the University of Michigan Survey Research Center and taught school in Baltimore, Maryland. In 1947 she married H. Thomas Robinson and together they raised five children. June had a passion for horseback riding, ice skating, tennis and golf. She won the state championship in ping pong and was very proud of this. She was also an avid Red Sox fan. She volunteered at the Creative Arts Center and the Library of North Haven for many years. Her recent publication of a children's book brought much joy to her family and friends. She is survived by her children David (JoeAnn) of Meriden, Ann (Joan) of Winona, MN, Susan of Auburn, ME, Lynn (Jim) Bauer of Casco, ME, and Tom (Annette) of Westfield, MA, eight grandchildren, and ten great-grandchildren. She was predeceased by her loving husband of 66 years, Dr. Tom Robinson in February of this year, and brother Robert in 2005. Honoring June's wishes, interment will be private and at the convenience of the family. BEECHER & BENNETT, 2300 Whitney Ave, Hamden in care of arrangements. Memorial contributions in June's memory may be made to the Evergreen Woods Employee Scholarship Fund, 88 Notch Hill Rd., North Branford, CT 06471.