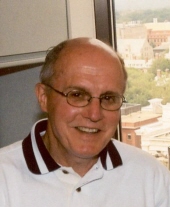 Surrounded by his loved ones, Karl Lennart Ogren, age 65, of Shepard Ave., Hamden (formerly of Spring Glen) passed away July 20, 2010 at his home, after a grueling battle with cancer. He was the cherished husband for 43 1/2 years of Julia Ryan Ogren; loving and devoted father of Lisa Marchitto, Kurt (fiance Alicia) Ogren, Todd (wife Bobbi) Ogren and Kraig Ogren; proud grandfather 'Papa' of Nicole & Cody Marchitto and Ryan Ogren. Born on Sept. 11, 1944 in New Haven he was the devoted son of the late Alfon and Margaret Madsen Ogren. He is survived by one loving brother, Paul (wife Margie) Ogren of Easley, SC and brothers-in-law and sisters-in-law who were not only his in-laws but his good friends; James & Rosalie Ryan of Branford, Russell & Virginia Ryan of Hamden and William & Sheila Ryan of Rockford, IL. He was predeceased by his father in-law and mother in-law James & Genevieve Ryan and brother-in-law Robert (wife Judy) Ryan. Karl also leaves nieces and nephews and grand nieces and nephews from, Plantsville & Branford CT, Easton MA, Carle Place, NY and Rockford, IL. Although he didn't see them often, time spent with all of them made for lasting memories which brought him many smiles. He leaves aunts and cousins and a host of friends of whom he was very fond as well. Karl was a graduate of Eli Whitney Technical School, Stone Business School and Quinnipiac College. He was a retiree of the UI Co. having retired in June 2005 after a 43 year career during which he rose to the rank of Risk Administrator of the company. He loved his country and served proudly in the US Air Force & US Coast Guard Reserves. Next to his family, his two other loves were the game of golf and the beauty of flowers. He was a former member of Quarry Ridge Men's Club and had the distinction of achieving 3 holes-in-one during his life time: two in Hamden and one in Key Biscayne, FL. A Funeral Service will be held at BEECHER & BENNETT FUNERAL HOME, 2300 Whitney Ave., Hamden, on Friday, July 23rd at 10:30 a.m., interment to follow in Beaverdale Memorial Park, Hamden. Friends may visit at the funeral home with his family on Thursday evening from 4 to 8 p.m. Contributions in Karl's memory may be sent to Bridgeport Hospital Foundation, Inc., Burn Center, 267 Grant St., Bridgeport, CT 06610- in memory/ honor of those co-workers of Karl who had been treated there OR to the charity of one's choice.