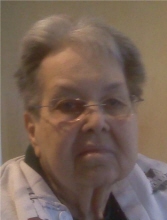 Meriden - Kathleen DeJohn, 84, wife of the late Daniel DeJohn died on Friday, January 14, 2011 at CT. Baptist Home. She was born September 3, 1926 in Lacompte, Louisiana a daughter of the late Dawn and Myrtle (Blankenship) Little. Kathleen moved to Conn. in August, 1943. She was a dental assistant for Dr. Brick for 18 years and also worked for the State of CT., Dept. of Income Maintenance for 15 years. Kathleen loved to sew and was a member of the First Baptist Church where she had also been a deaconess. She is survived by a son Scott Kuhta and his wife Callie of Meriden, two granddaughters, Leanda and Shannon Kuhta and two great grandsons, Jacob Kuhta and Antonio Reyes. She was predeceased by her first husband William Kuhta and a brother, Douglas Little. A funeral will be held on Monday, January 17, 2011 at 9:30am from the Beecher & Bennett-Flatow Funeral Home, 48 Cook Ave., Meriden and at 11:00am at the First Baptist Church, 460 Broad St., Meriden. Burial will follow at Walnut Grove Cemetery. Relatives and friends may call at the funeral home on Sunday, January 16 from 2-5pm.