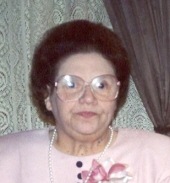 Kathleen Joan Nixon, 77, of New Haven, passed away on August 21, 2010 at Yale New Haven Hospital after a short illness. She was born in Surry, England on November 28, 1932 to the late Robert and Beatrice Stannard Wilson. Kathleen is survived by her two sons and their wives, Harry Taylor Nixon and Elizabeth of New Haven and Robert Nixon and Dawn of East Haven; grandchildren, Harry III (TJ), Adam, David, Heather, Dana, Beatrice, Noel and Courtney Nixon; great granddaughters, Alexis and Destinie Nixon; brother, Robert Wilson of London, England. Kathleen grew up in England having moved to the US in 1958 and has lived in New Haven ever since. For the last 45 years she had been an active member of the Pilgrim Congregational Church in New Haven. She had worked at Macy's for over 25 years in different positions, mainly being a sales clerk and the switch board operator. Kathleen enjoyed knitting hats and sweaters for each of her grandchildren whom she loved to spoil. She will be remembered as a loving, strong willed women who always put others before herself. A Funeral Service will be celebrated on Thursday, August 26th at 10 a.m. at the Pilgrim Congregational Church, New Haven followed by interment in All Saints Cemetery. Friends may visit with the family on Wednesday evening at BEECHER & BENNETT, 2300 Whitney Ave., Hamden from 5 to 8 p.m. Contributions in Kathleen's memory may be sent to Pilgrim Congregational Church, 65 East Grand Ave., New Haven, CT 06513.