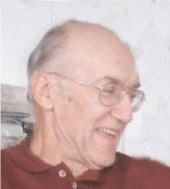 Keith F. Schmermond, 64 of Hamden passed away Monday, March 5, 2012 in the Hospital of St. Raphael. Son of Charlotte Barske Schmermond of Hamden and the late Henry G. Schmermond and brother of Paul E. Schmermond. He was born in New Haven, September 4, 1947 and served in the US Naval Reserve, and had worked as a building contractor. Keith loved his family and took pride in his garden. His funeral service was private and under the direction of BEECHER & BENNETT, 2300 Whitney Ave., Hamden.