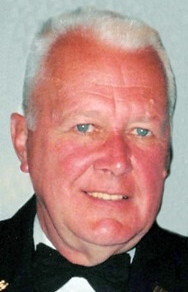 Col. Kenneth D. Gertz, Sr., 89, loving husband of 66 years to Joan Laine Gertz, passed away March 27, 2022 after a brief illness. He was born in Torrington March 1, 1933, a son of the late Arthur and Ruby Stacker Gertz, and had resided in Cheshire since 1960.
He is survived by a daughter and her husband, Donna and Gary Thompson of New Milford; his grandchildren and their spouses, Scott (Jillian) Thompson of New Milford, Corey (Kimberly) Thompson of Middlebury, Courtney (Daniel) Mingrino of Cheshire, Heather Gertz of Tennessee, and Kyle Gertz of Meriden; 10 great-grandchildren, and his brother Gustav Gertz of Killingworth. He is predeceased by his son Kenneth Gertz, Jr., his grandson Kenneth Gertz, III, sisters Ruby Brayell, Linda Lauderi, and Lillian Centrella, and brothers Arthur Jr., Robert, Jacob “Bill,” and James Gertz.
After graduating from Hamden High School in 1951 he joined the Navy, where he served as a Corpsman and 1st Surgical Assistant aboard the USS Helena during the Korean War. After being honorably discharged, he attended the University of Connecticut and graduated with a BS degree in physical therapy. In 1964, he joined the Army Reserves and was commissioned as a First Lieutenant. He was assigned to the 340th General Hospital in New Haven as a physical therapist. Through his years of service, he received numerous awards, commendations and promotions. He was promoted to his final rank of Colonel on January 3, 1983. He remained in the Reserves until he reached the age for mandatory retirement on March 1, 1993. In his retirement he remained a home health physical therapist, working until the age of 85. He also served as the Executive Director of the Easter Seals Rehabilitation Center of Meriden for 30 years. In 2020 he was nominated for and received the prestigious award of the Order of Saint Maurice, an award presented to a member of the infantry community who displays the highest standards of integrity, moral character, professional competence and dedication to duty.
Ken was always very involved in his community. He was President of the Jaycees, a member of the Meriden Kiwanis Club, the New Haven Elks Club #25, and the Day Spring Lodge #30 A.F. & A. M., where he was Treasurer and ran Bingo. He was also a member and Honorary Captain of the 2nd Co. Governor’s Foot Guard, Past Commander of American Legion Post #88, the New Haven Greys, where he served as President of the Retired Division, and an active member of the First Congregational Church of Cheshire for many years. He was the recipient of numerous community awards and citations for his dedication.
Friends are invited to visit with his family on Friday, April 1st from 4-8 p.m. at BEECHER & BENNETT, 2300 Whitney Avenue, Hamden. A Masonic Service by Day Spring Lodge will be held at 7 p.m. All are invited to attend a funeral service Saturday morning, April 2nd, at 10 a.m. in the First Congregational Church, 111 Church Drive, Cheshire, followed by Military Honors. In lieu of flowers, contributions in Ken’s memory may be made to the Wounded Warrior Project, P.O. Box 758516, Topeka, KS 66675, Disabled American Veterans (DAV), P.O. Box 14301, Cincinnati, OH 45250, or the Shriners Hospitals for Children, P.O. Box 947765, Atlanta, GA 30394.