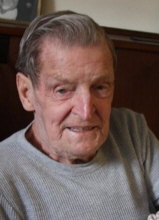 Kenneth 'Herky' Patchell, 85, of Hamden, entered into eternal rest on Sunday April 6, 2014, peacefully at home with his loving family by his side. Kenneth, son of the late Harry Patchell and Ruth Haynes Patchell, was born in New Haven, CT on March 28, 1929. He was a Hamden resident for 64 years. He was the devoted husband to the late Rosalie Peckingham Patchell for 57 years. He worked at U-Haul, as well as Arden House, for many years prior to retiring. Mr. Patchell was a war veteran serving in US Army during the Korean War; he was a member and held the position of Board of Governors for the Hamden American Legion Post #88, a member of Hamden Elks Lodge #2224 and a lifetime member of the Arbeiter Maenner Chor. He was an avid gardener and sports fan who loved to watch the NY Giants, NE Patriots, Boston Red Sox and UCONN Basketball. Beloved father of Karen Burch of Hamden, Kenneth Patchell (Sharen) of Kempner, TX and Kevin Patchell of Wallingford, he is also the cherished grandfather of Brian Patchell (Anna), Jaimie Andrews (Brian), Jessica Vitale (Burt), Robert Marone, Heather Garcia (Johnny), Stephen Patchell (fiancee Dana), Jason Burch (Vicki), Michelle Kirkpatrick (Justin) and Melissa Burch, while also survived by 14 great-grandchildren, Nicholas and Ryan Vitale, Josh Andrews, Christian Perez, Jaiden and Devin Garcia, Brendan, Jonathan and Lauren Patchell, Christopher Lombardo, Nicholas and Lindsey Patchell and Jason and Madilyn Burch. Also left to cherish his memory are Arlene (Andy) Conti, Bruce Hunt and many other nieces and nephews. Kenneth will be greatly missed by his family and many close friends. Kenneth was predeceased by his siblings Robert Patchell, Harry (Buster) Patchell, James (Perry) Patchell, Raymond Patchell, Ruth (Tiny) Hunt, Dorothy Hoffman and Barbara Stowe. A Funeral Service and celebration of Kenneth's life will be held at BEECHER & BENNETT, 2300 Whitney Ave., Hamden on Thursday, April 10, 2014 at 10:00 AM. Burial with Military Honors will follow in Hamden Plains Cemetery. Friends may visit at the funeral home with the family on Wednesday evening from 4:00 to 7:00 PM. In lieu of flowers memorial contributions in his name may be sent to CT Hospice, www.hospice.com, 100 Double Beach Rd., Branford, CT 06405.