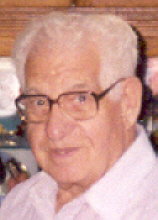 Kenneth Joseph Reynolds, 90, of 169 Borrmann Rd., East Haven, husband of the late Marilyn McNamara Reynolds passed away at Yale-New Haven Hospital Friday, Oct. 6, 2006. He was the father of Susan Reynolds and her husband, Roger Loiseau of East Haven, and Kevin Reynolds and his wife, Stacy Reynolds of Branford, grandfather of Michael Reynolds and Nicole Reynolds of Branford, brother of Irene Schoen of Hamden and Elsie Peterson of Florida. Kenneth was born in New York City, Aug. 27, 1916 son of the late Joseph and Marjorie Juengst Reynolds. He was employed as a tool and die maker at United Nuclear, and was an avid wood worker and craftsman of custom furniture. He also built his own boat. Graveside service of interment will be Tuesday Oct. 10 at 10 a.m. in All Saints Cemetery, North Haven. Arrangements under the direction of BEECHER & BENNETT, 2300 Whitney Ave., Hamden.