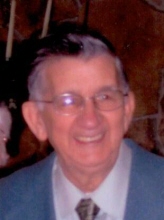 Kenneth L. Finer, 84, of Hamden, passed away on February 6, 2016 at the Masonic Health Center. Born in New Haven to the late Eustace & Elizabeth Dudley Finer. Ken is survived by his beloved wife of 59 years, Anna Beltramello Finer; his daughters, Darlene Levy & her husband Gordon of Pickens, SC, Lois Boling & her husband William of Windsor; his grandchildren, Kenneth, Christina, Joseph Boling, and Benjamin Levy. Predeceased by his brothers, Clayton, Harold, and Thomas Finer. Ken had been employed as a tool & die maker having worked for A.C. Gilbert Co., Die Sinking Co. of West Haven and retired from Pegasus Mfg. of Hamden after 5 years in 1996. He was a proud veteran having served in the US Army during the Korean War and then joined the National Guard from 1952-1954. Ken was a member of American Legion Post #88, Hamden. He liked working with his hands, whether constructing model boats or making toys for his grandchilden. During his spare time he used to enjoy bowling and more recently, watching the UCONN Womens basketball team. Friends are invited to visit with his family on Tuesday, February 9th from 8:30 to 9:30 a.m. at BEECHER & BENNETT, 2300 Whitney Ave. Hamden followed by a Mass of Christian Burial in Our Lady of Mt. Carmel Church at 10:00 a.m. Burial with Military Honors will be in All Saints Cemetery. Contributions in Ken's memory may be sent to CT Hospice, 100 Double Beach Rd, Branford, CT, 06405.