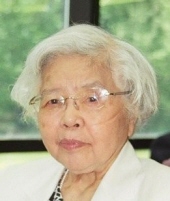 Kimiko Tamagawa, 84, loving wife of Tsuneo Tamagawa of 55 years, passed away May 24, 2010 in Yale New Haven Hospital. She was born Sept. 6, 1925 in Tokyo, Japan, a daughter of the late Takeshi and Iwa Kozu and was a graduate of Tokyo Women's College in 1947. She resided in North Haven from 1965 - 2006 when she moved to Hamden. Mrs. Tamagawa was an assistant in the Yale University Sterling Library, East Asia Collection, from 1975 until her retirement in 1998. In addition to her husband she is survived by 2 daughters, Sahoko Tamagawa of Berkeley, CA, Emiko Tamagawa of Attleboro, MA, 3 sons, Kiyoshi Tamagawa of Austin, TX, Takashi Tamagawa of North Haven, Satoshi Tamagawa of Kawasaki, Japan, a brother, Ken-ichi Kozu and 2 sisters, Takeko Moroh and Kaoruko Kobayashi all of Japan. She is also survived by 4 grandchildren Hisayuki and Rieko Tamagawa and Mira and Leo Gordon. Friends may visit with her family on Friday afternoon May 28, 2010 from 3-6 p.m. at BEECHER & BENNETT, 2300 WHITNEY AVE., HAMDEN. Contributions in her memory may be sent to the American Lung Association of Connecticut, 45 Ash Street, East Hartford, CT 06108-3272.