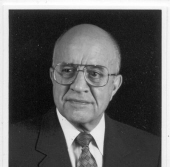 Dr. Ameen, a longtime Associate Clinical Professor of Psychiatry at Yale University, fellow of Jonathan Edwards College at Yale, practiciing psychiatrist, and Medical Director and CEO of a private psychatric hospital, died at his home in New Haven June 13, 2009 after a brief illness. Dr. Ameen came to Yale in the early 1950's, where he remained his entire career. His research interests were varied and evolved along with the field of psychiatry in general. His early research focused on schizophrenia, psychosomatic disorders and traditional psychotherapeutic methods of the Freudian era. He was later influenced by Erik Erikson in his research and practice, and later still by the emerging psychopharmacological studies and treatments that are common in the practice of psychiatry today. Dr. Ameen was the Medical Director and CEO of Elmcrest Psychiatric Institute in Portland, CT. During his time at Elmcrest, he lead the hospital's movement away from being a solely full-stay, residential facility. The hospital built what were then innovative networks of state-wide partial hospital program treatment facilities. In addition, the Elmcrest approach helped pioneer many techniques which have since become the norm in many current psychotherapies, including discouraging the locking of doors, innovative therapies incorporating the arts, and no uniform requirements on the part of the patients or staff. The hospital was sold in 1997. Dr. Ameen continued to serve as a consultant for a number of years, but the hospital has since closed and is no longer operational. Beginning in 1980, Dr. Ameen became a consultant to the Kuwaiti government, working with the University of Kuwait in setting up a psychiatric department, psychiatric hospitals and psychiatric outpatient departments. He lectured extensively during this period at the University of Kuwait School of Medicine. He was actively involved with the Long Wharf Theater in New Haven for many years, serving on its Board of Trustees beginning in 1965. Among his many philanthropic and community-based activities, Dr. Ameen was the President of the Fellowship Club, Inc., a comminity-based organization that provides psychosocial rehabilitation services to adults recovering from mental illness. Lane Ameen was born in Hopewell, VA., the son of immigrant parents from Lebanon. He graduated from the University of Virginia in 1943, and received his M.D. from there in 1946. He received his psychiatric training at the Menninger Institute, and his psychoanalytic training at Western New England Psychoanalytic Institute. Dr. Ameen was a Captain in the U.S. Army, and served as a psychiatric consultant and practitioner to the government in many capacities, including many years of service with the Veterans Administration Healthcare System. He is survived by his wife of 52 years, May Sams Ameen, his daughter, Nancy of Bryn Mawr, PA.; his son the jazz musician Robby Ameen of New York; a sister, Josephine Brashear, of San Juan Capistrano, CA., and a brother David, of Hopewell, VA., as well as four grandchildren. Services are private. Interment in Abel Hill Cemetery, Chilmark, MA. Contributions in Lane's memory may be made to Fellowship Place, 441 Elm St., New Haven, CT 06511 OR Long Wharf Theatre, Development Office, 222 Sargent Dr., New Haven, CT 06511. Arrangements in care of BEECHER & BENNETT 2300 WHITNEY AVE. HAMDEN