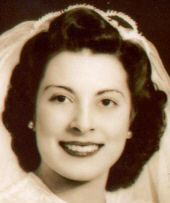 Laura DeFelice of 142 Chatterton Way, Hamden Connecticut, died September 16, 2007 with her loving family beside her. Born in New Haven, Connecticut on June 5, 1922, she was a daughter of Jerry and Filamina (Tozzo) Mastrangelo and the loving wife of the late Frank C. DeFelice. She is survived by her five sons: James F. DeFelice, Gerald T. DeFelice, Frank C. DeFelice, Jr., Joseph A. DeFelice, Ronald J. DeFelice; a daughter, Susan L. Preis, and three grandchildren. She is also survived by two sisters; Gloria LaTorraca and Rose Anastasio and predeceased by her sisters Eleanor Mastrangelo and Mary Ciaburri. Mrs. DeFelice graduated from New Haven High School (Hillhouse) in 1940, where she participated in Singing, Drama and Archery; and later attended the Stone School of Business in New Haven, Connecticut. Mrs. DeFelice was employed as Assistant Town Clerk in Cromwell, Connecticut and Secretary to the Superintendent of Schools in Hamden, Connecticut. She was also employed as Secretary to the Principal of Harlingen High and the Harlingen Board of Education in Harlingen, Texas. An active volunteer in the community, Mrs. DeFelice served on the Planning & Zoning Commission and the Republican Town Committee in Hamden, Connecticut for many years. She also served as Vice-President for Bonnie View, Inc. and was active in the Knights of Columbus in Hamden, Connecticut. Funeral from BEECHER & BENNETT, 2300 Whitney Ave., Hamden, Thursday, September 20, 2007 at 9:30 a.m. A Mass of Christian Burial will be celebrated in Our Lady of Mt. Carmel Church at 10:00 a.m. Friends may call Wednesday from 5-8 p.m.