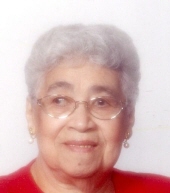 MERIDEN - Laura Ramos, 87, of 166 Pratt Street, died at her residence on Thursday, May l7, 2007. She was the wife of the late Manuel Ramos. Born in Aguada, Puerto Rico on June 26, 1919, she was daughter of the late Ventura and Epifana Gonzalez Garcia. She was a member of Victory Tabernacle of Middlefield. She is survived by two daughters, Laura "Maria" Rojas and her husband, Miguel and Rosa Ramos, all of Meriden; four sons, Roberto Ramos and his wife, Doris of Meriden, Jose Ramos of Aguada, P.R., Inocensio Ramos and his wife, Teri and William Ramos and his wife, Margarita, all of Meriden; eleven grandchildren and seventeen great-grandchildren. She was predeceased by a daughter, Carmen Lydia Ramos and a son, Ruben Ramos. She was a loving and devoted mother, grandmother and great-grandmother. The family would like to express their thanks to her caregivers, Sylvia Bouton, Denia Ortiz and Kristen Volte-Bradley. The funeral will be held Monday at 10 a.m. at Victory Tabernacle Church, 191 Meriden Road, Middlefield. Burial will follow in Sacred Heart Cemetery in Meriden. Relatives and friends may call Sunday from 4 to 8 p.m. at the Beecher and Bennett Flatow Funeral Home, 48 Cook Ave., Meriden Contributions in Mrs. Ramos' memory may be made to the American Cancer Society, 538 Preston Ave., Meriden, CT 06450.