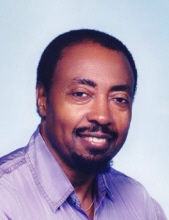 The Lord called His beloved son, Laverne Williams Sr., home on August 25, 2015. He was born on December 24, 1939 in Lamar, South Carolina to the late Eula Mae(Williams) and Oscar B. (Carraway). Our beloved Laverne Sr. was a beloved brother, father, grandfather, uncle, friend and so much more. He has departed from this world to begin his eternal life with the Lord. Laverne Sr. worked at New Departure (General Motors), for twenty-eight years and retired in 1995. In his younger years he was an active bowler and baseball player, but fishing was his true passion. Family and friends enjoyed the fresh porgies from the day's catch and how he generously shared with fish lovers. He continued to fish until he was unable because of his illness. However, Laverne Sr. is now casting out his reel in the placidity of the crystal sea—and has hooked eternity. He possessed a genuine and contagious sense of humor that was evident when he was at family functions. His siblings and childhood friends called him Mic; a name that remained with him throughout his days. Laverne Sr. (Mic) is survived by his seven children: Laverne Jr. of RI, Joyce (Durwin) Jones of NC, JeffreyTyrone Williams of CT, Valerie (Calvin) Anderson of NC, Jennifer Williams of CT, Kenneth (Noelle) Covington of SC, and Chrissy Outlaw (Kahseim) CT; Many beautiful grand and great-grandchildren along with a host of nieces, nephews, and cousins. He also leaves behind eight sisters, Nettie Fortune, Marvelle Carraway, Edel (Leon) McDaniel all of SC, Ruby Louise McCullum, Clarice and Priscilla Carraway all of NY, Flossie Mae and Valerie Carraway both of SC and his brothers: James Sr. (Julia), Wilton Sr. Carraway, Leroy (Catherine) Williams all of CT, Leland (Corrie) Carraway of SC Robert (Valerie) Carraway of NJ, William (Clarice) Carraway, and Authur Carraway of SC. He was predeceased by his brothers, Oscar Jr.(Gwendelyn), Zachary Carraway and his sister-in-law Annette Carraway. A funeral service will be held on Monday, August 31, 2015 at 11 a.m. at Ward St. Church of Christ, 164 South Whittelsey Ave., Wallingford. Burial will follow at Walnut Grove Cemetery, Meriden. Relatives and friends may call at the Beecher & Bennett-Flatow Funeral Home, 48 Cook Ave., Meriden on Sunday, August 30 from 1-5 p.m. In lieu of flowers, the family welcomes memorial donations in honor of his memory to Connecticut Hospice, 100 Double Beach Road, Branford, CT 06405; or the American Cancer Society, 38 Richards Avenue, Norwalk, CT 06854.