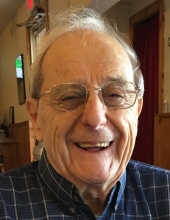 Lawrence A. 'Larry' Tarca, 91, passed away peacefully on July 10, 2019 at Masonicare. He was the beloved husband of the late Jean L. Tarca for 58 years. Larry was born in Hartford on June 20, 1928, son of the late Constantino and Susan (Contessa) Tarca. He grew up in Hartford and graduated from Hartford Public High School. He went on to honorably serve in the United States Army during the Korean War. Larry retired as a manager at Unimax Switch in Wallingford and was a member of the Masonic Fraternity for 65 years. Larry is survived by four children and their spouses, Laurie and Mark Conrad of Portland, ME, Thomas and Sharon Tarca of Fort Myers, FL, Nancy and Robert Charrette of Windsor Locks, and Susan Vaillancourt of Meriden; and seven grandchildren, Sam and Ben Conrad, Steven Tarca, Andrew and Eric Charrette, and Amanda and Erica Vaillancourt. Relatives and friends are invited to visit with Larry's family on Monday, July 15 from 11:00AM to 1:00PM at Beecher & Bennett-Flatow Funeral Home, 48 Cook Ave., Meriden. His funeral service will be conducted in the funeral home at 1:00PM. Burial with Military Honors will follow in Walnut Grove Cemetery. In lieu of flowers, memorial donations in Larry's name can be made to the Alzheimer's Association at www.alz.org.