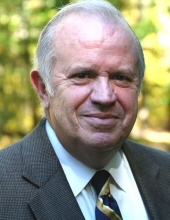 CONGRESSMAN LAWRENCE J. DeNARDIS Lawrence Joseph DeNardis, age 80, of Hamden, CT, passed away peacefully on August 24th at Yale-New Haven Hospital surrounded by his family. Dr. DeNardis was born in New Haven, CT on March 18, 1938, the son of the late Lawrence and Elena (Battaglia) DeNardis. He graduated from Hamden High School in 1956 where he met Mary Louise White, his beloved wife and life partner of 57 years. He received his B.A. from the College of the Holy Cross in 1960 and went on to earn a Master's degree in 1964 and his Ph.D. in Government in 1989, both from New York University. He was a lieutenant in the U.S. Naval Reserve from 1960-1963. Dr. DeNardis' distinguished career spans both government and higher education. His academic career began at Albertus Magnus College, where he was an associate professor and department chairman from 1964-1979. He was President of the Connecticut Conference of Independent Colleges from 1979-1980. He later became the fifth president of the University of New Haven, where he served from 1991-2004. He served as the youngest delegate to the Connecticut State Constitutional Convention in 1965. He served in the Connecticut State Senate from 1970-1979. As a state senator he pioneered groundbreaking legislation, including sponsoring Connecticut's first school funding formula to equalize funding between school districts, and was a delegate at the Connecticut State Republican conventions from 1966-1982, where he served as chairman in 1982 and as a delegate in 1976 at the Republican National Convention. Dr. DeNardis was elected to the Ninety-seventh Congress (1981-1983) serving the Third Congressional District of Connecticut in the U.S. House of Representatives. He was a Visiting Professor of Government at Connecticut College from 1983-1984, Acting Assistant Secretary at the Department of Health and Human Services from 1985-1987, and was appointed by President George Bush to serve as a member of the Board of Regents of the National Library of Medicine. He was Guest Scholar at the Woodrow Wilson International Center in Washington D.C in 1987. Dr. DeNardis also served as chairman of the Tweed New Haven Regional Airport Authority. He became the fifth president of the University of New Haven in 1991, where he served until 2004. Under his leadership, he transformed the university from a commuter college to become a top tier residential university in the northeast. As president emeritus, Dr. DeNardis returned to the UNH faculty to teach national security policy in the university's Washington D.C. program. He was an official election observer for the national parliamentary and presidential elections in Ukraine and Tanzania in 2005 and co-chaired delegations from both the Association of Former Members of Congress and the National Democratic Institute for International Affairs. He also led a delegation of former members of Congress to meet with the new president of Chile in 2006. Dr. DeNardis was a devout Catholic and a parishioner at our Lady of Mount Carmel Church in Hamden. He was a Knight of Malta and most recently served on the Pastoral Council for the Archdiocese of Hartford. Most recently, he served as a member of the Connecticut State Board of Regents for Higher Education and Chairman of the Connecticut Humanities Council. In 2017, he was awarded an Honorary Fellowship of Liverpool John Moores University for creating transatlantic academic opportunities through a partnership with Southern CT State University. Larry is survived by his wife, Mary Lou (White) DeNardis; his daughter Dr. Lesley DeNardis & her husband Dr. A.E. Rodriguez of Hamden, CT; his sons, Larry J. DeNardis Jr. of Deep River, CT, Mark DeNardis & his wife Wendy of North Haven, CT and Gregory DeNardis & his wife Cherise of Ocala, FL and his grandchildren, Matthew, Grace, Claire, Jameson and Triniti DeNardis. Friends may visit with his family on Monday, August 27 from 4:00 to 8:00 pm at Beecher & Bennett Funeral Home, 2300 Whitney Avenue, Hamden. and may attend his Mass of Christian Burial that will be celebrated on Tuesday, August 28 at 12:00 pm directly at Our Lady of Mount Carmel Church in Hamden. Burial with Military Honors will follow in All Saints Cemetery, North Haven. In lieu of flowers, charitable memorial contributions may be made to: The DeNardis Family Scholarship, University of New Haven, Office of Development, 300 Boston Post Road, West Haven, Connecticut 06516.