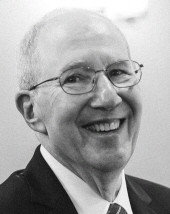 Lawrence Roy Solomon MD, aged 73, died of melanoma on December 14, 2016 at The Connecticut Hospice. Dr. Solomon hailed proudly from the Bronx, NY. He attended City College of New York and the New York University School of Medicine before moving to New Haven to start his medical residency at Yale New Haven Hospital in 1967. From 1969-1971 he conducted research at the National Cancer Institute of the National Institutes of Health. He went on to pursue training in hematology / oncology at the University of Washington before returning to practice medicine at the West Haven Veteran's Administration Medical Center, the Yale Health Plan, and the Yale School of Medicine. He was proud to have been named medical housestaff teacher of the year in 1989. From 1990-1993, Dr. Solomon was Medical Director of The Connecticut Hospice. His concern for advancing and improving end of life care eventually led him back to YNHH where he established the Adult Palliative Care Service in 2007. He continued to practice at Yale as an Associate Professor of Medicine until his retirement in 2014. He was passionate about his work in medicine and will be remembered for the intelligence, integrity and compassion he brought to his teaching, research, and patient care. Larry approached life with a ready smile, a joke, and a positive attitude. In free moments he could be found by the water, reading history or science fiction books, listening to show tunes and classical music or tirelessly cheering on the Mets. His greatest love was for his family and the time he spent with them. Dr. Solomon is survived by his wife of 44 years, Carol, his three children Rachel Solomon, MD (Jason Smerdon), David Solomon, and Peter Solomon; and his granddaughter, Sophia Smerdon. He also leaves behind beloved brothers and sisters-in-law, nieces, and many dear friends. He will be greatly missed. The family wishes to thank the physicians at Smilow Cancer Hospital (especially Dr. Mario Sznol) and the nurses of 12 North and the Oncology Clinic for their exemplary care and support. We also extend our gratitude to the care team at The Connecticut Hospice for making his final days comfortable physically and emotionally. A memorial service will be held at 11 AM on Saturday, February 18, 2017 at the Unitarian Society of New Haven, 700 Hartford Turnpike, Hamden, CT 06517. In lieu of flowers, please consider making a donation in Larry's name to Doctor's Without Borders (donate.doctorswithoutborders.org, PO Box 5022 Hagerstown, MD 21741-5022), the Yale-New Haven Palliative Care Fund (www.givetoynhh.org/palliative, Office of Development Yale New Haven Hospital, PO Box 1849 New Haven, CT 06508), or The Connecticut Hospice (www.hospice.com/donate, 100 Double Beach Road Branford, CT 06405).