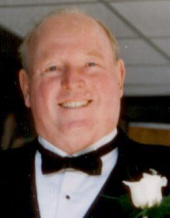 Lee Edward Davies, 70, loving husband of 43 years of Judith Comstock Davies, passed away unexpectedly in Gainesville, FL March 30, 2014. He was born in New Haven January 20, 1944, a son of the late Russell and Dorothy Loughlin Davies, and resided in Hamden and Naples, FL. Beloved father of Brenda (Edward) Byers of Lakeway, TX, and Brian (Lisa) Davies of Southington. Grandfather of Charles Byers, Erika, Kevin, and Paige Davies. He was predeceased by a granddaughter, Allison Byers. Lee grew up in West Haven and Orange and graduated from Amity H.S. He graduated from New England College in 1966 and worked for the CT DOT for 3 years. He then came to Hamden to become its first Traffic Director, retiring in 2005 after 37 years. He served on the Board of Directors for the Hamden-North Haven YMCA, and was on the Board of Directors for the Greater New Haven Transit District until 2005. Lee was an active longtime member of the Hamden Rotary Club, serving on many of their committees over the years. He was their President in 1994-1995 and he was a Rotary Paul Harris Fellow. Lee enjoyed boating, being a devoted grandfather, and taking care of his grand dog, Niko. Relatives and Friends are invited to visit with his family Wednesday, April 2, from 4:00 - 7:30 pm at BEECHER & BENNETT 2300 WHITNEY AVE. HAMDEN, and are also invited to attend a Prayer Service on Thursday, April 3 at 10:30 am in the funeral home. Interment in Beaverdale Memorial Park will be private. A celebration of life will be held in Naples, FL where his wife Judy currently resides. Contributions in his memory may be sent to the Hamden Rotary Club, P.O. Box 185304, Hamden, CT 06518.