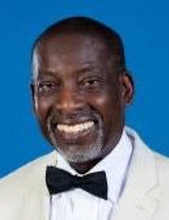 Leighton Beresford Greenidge, 68, loving husband of 21 years to Elizabeth Suttle Greenidge of Southbury passed away April 22, 2020. Father of Bari (Shanta Schachter) Greenidge, Brian Greenidge, and Ruqqiya (Richard) Greenidge Henson. Grandfather of Leo Greenidge. Brother of Avis (Roy) Walcott, Anthony (Masilla) Greenidge, and Ronald (Cassandra) Greenidge. Brother-in-law of Betty, Jezreene, and David Suttle. Uncle of Michael James, Kirkwood, and Kayla Greenidge. Also survived by his relative Ione Marshall. He was born in Christ Church, Barbados, son of the late Milton B. and Carmen Vaughn Greenidge, and was an electrical contractor in New York. His passion was playing cricket; he was a Past President of the Southern CT Cricket League and the CT Cricket League, as well as a member of the New Haven Cricket Club and the Barbados Cricket Association. Leighton was also a member of Solutions Barbados. His funeral service will be private and he will be laid to rest in Christ Church, Barbados.