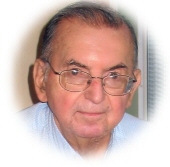 Leon J. Ziobrowski 80, of Meriden died Saturday, May 24, at Coccomo Memorial Healthcare Center. He was the son of the late Stanley Ziobrowski and Kinge Wrobel Ziobrowski. Leon was a lifelong resident of Meriden. He attended St. Stanislaus School and later went on to earn his GED. Leon was honorably discharged from the United States Army in 1952. He retired from Pratt & Whitney, where he was a foreman, in 1987. Since his retirement from Pratt & Whitney, Leon has enjoyed spending time with his family and friends, especially his two grandsons whom he adored. Leon was a loving father, grandfather, brother, uncle and friend. He is survived by his ex-wife, Donna Kaye Ericson of Meriden, his daughter, Julia K. Ziobrowski of Meriden, his son Stephen Ziobrowski and his wife Beth (Leiner) Ziobrowski of Cheshire and his two grandsons, Zachary and Gregory Ziobrowski of Cheshire. Leon is also survived by his sister, Natalie Mordarski of Meriden, his nephews, Francis Pasinski and his wife Barbara of Wallingford, Daniel Mordarski and his wife Gail of Meriden and his niece Maryellen Mordarski of Meriden, as well as several grand nephews and nieces. Leon was predeceased by his brother, Edmound Ziobrowski and his sisters, Nimfa Pasinski and Edna Gaj. Funeral service Thursday, May, 29th at 11:30 a.m. at Beecher & Bennett - Flatow Funeral Home, 48 Cook Avenue, Meriden, CT. Relatives and friends may call at the funeral home on Thursday 9:30-11:30 a.m., prior to the service. Burial will be at the State Veteran's Cemetery in Middletown. Memorial donations can be made to the MidState VNA & Hospice, One Research Parkway, Meriden, CT 06450 - (203) 235-5714.