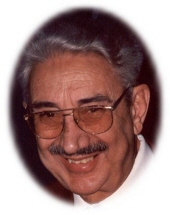 Hamden- Leonard Leto, 86, of 3409 Whitney Ave., Hamden, devoted husband of the late Dora Panizari Leto, died peacefully on Feb.15, 2007 in Cambridge, MA after a brief illness. Mr. Leto was born in Bridgeport, CT Sept. 23, 1920, a son of the late Ottavio Leto of Ribera, Sicily and Josepine Nigro of Modica, Sicily and had been a resident of Hamden since 1993. He served in the US Army during WW II, in the Philippines and New Guinea, and earned a B.S. Degree in Chemistry from Northeastern University. He worked as a forensic chemist in the CT Dept. of Health Toxicology Lab in Hartford for 25 years until his retirement in 1997. Earlier, he worked as a chemical engineer in the aerospace industry. He retired in Hamden where he embraced his newfound community of welcoming friends. An avid music lover, he enjoyed choral, operatic and classical music, aerobic dancing, travel and living life fully. He was an active member of Our Lady of Mount Carmel Church having sung in the choir, a member of the Hamden Senior Center, the Knights of Columbus, the American Legion Post # 88, and the Trinacria M.A. Society of Bridgeport. He is survived by 2 daughters and their husbands, Leona "Arthur" May of Stratford, CT, Elizabeth "Scott" Leto Fulton of Boston, MA, 2 sons and a daughter-in-law, John "Paulette" Leto of West Haven, and Thomas Leto of Washington, DC, 2 grandchildren, Sean May and Asa Fulton, a great-granddaughter Leah May, and many nieces, nephews, and cousins. In addition to his wife, he was predeceased by a brother Anthony Leto. Friends may call Fri., Feb. 23, from 4-8 p.m. at BEECHER & BENNETT, 2300 WHITNEY AVE., HAMDEN. Friends and relatives are invited to go directly to Our Lady of Mount Carmel Church where a Mass of Christian Burial will be celebrated on Sat. at 10 a.m. Interment with Military Honors in Centerville Cemetery. Contributions in his memory may be sent to the Northeastern University Annual Giving Program, 716 Columbus Avenue, Boston, MA 02120.