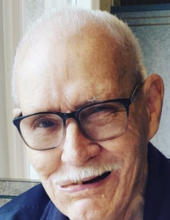 LeRoy Kenneth Allen, Jr., 90, devoted husband of Margaret Luby Allen for 70 years, passed away April 27, 2020 after a brief illness. He was born in New Haven August 29, 1929, a son of the late LeRoy K. and Willa Miller Allen, Sr., and had resided in New Haven for many years. He served in the US Army from 1948-1955 and was later employed as a chef in area restaurants before retirement. Loving father of Bonnie Larson of West Haven. Brother of Paul (Laura) Allen, Caroline Allen, and Robert (Corrine) Allen. Grandfather of Kandice Allen, Sarrah Allen, Kris (Spencer) Ludington, Kenneth Cabral, and Herbert Larson. LeRoy is also survived by 12 great-grandchildren and a daughter-in-law, Sandra Norman Allen of VT. He was predeceased by a son, LeRoy K. Allen, III, brothers Bruce and Richard Allen, and a grandson, Kristopher Allen. Funeral service will be private.