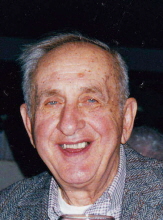 Meriden - Leslie John Eslinger, 91, of Meriden, passed away peacefully on Saturday, September 1, 2012, into the arms of his Lord and Savior, Jesus Christ, surrounded by friends at Miller Memorial Community Hospice in Meriden. Born in Gyor, Hungary on December 23, 1920, and raised in New York City, Les was happily married to Margaret Czeising Eslinger for 51 years until her passing in 1994, raising two boys in both Massapequa, LI, New York and subsequently in Wallingford, CT. Les is survived by his son and daughter-in-law, Robert S. Eslinger and Barbara R. Eslinger, of Pomfret Center, CT; daughter-in-law, Anne Kemp Eslinger of Enfield, CT; grandchildren, Keith R. Eslinger of Woodstock, CT, Neal C. Eslinger of Putnam, CT, Katie Eslinger of Avon, CT, and Lynsey Eslinger of Enfield, CT, several nieces and nephews, and his dearest friend, Sheila Spellacy of Meriden, CT. His beloved wife, Margaret, and son, Peter, predeceased him, as did his two brothers, Steve and Frank Eslinger. An Army veteran of WW II, with the rank of Technical Sergeant, he was stationed in Hawaii until January 1946. Les worked as a legal secretary and stenographer for the US Government, US Court of Appeals until his retirement. Since then, he enjoyed traveling to his native Hungary and Italy where he met Pope John Paul, II. He was active for many years doing volunteer work for the Franciscan Sisters of Meriden and in the Emergency Room at MidState Hospital. Les was an avid reader who surrounded himself with thousands of books, his interests were many and diverse and included the sciences, especially astronomy, early aircraft, maritime and railroad history, science fiction, the history and politics of the Vatican, the wild west and especially books written by author, Louis Lamoure. Les loved classical and opera music, photography, painting with oils, building model wooden ships and planes, and making wooden toys and doll houses for the little people in his life. He had a warm, friendly, intelligent spirit, and his gentle, caring soul will continue to shine and inspire those who knew him. Relatives and friends are invited to attend a Mass of Christian Burial at St. Joseph Church, 22 Goodwill Ave., Meriden on Friday, September 7 at 11 a.m. Interment in Sacred Heart Cemetery. Arrangements are in care of Beecher & Bennett-Flatow Funeral Home, 48 Cook Ave., Meriden. In lieu of flowers, donations in his memory may be made to the Franciscan Sisters of the Eucharist, 405 Allen Ave., Meriden, CT 06451-3607.