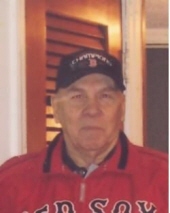 Meriden- Lewis Joseph Moro Sr., 88, passed away peacefully surrounded by his family on Tuesday, November 5, 2013 at Masonic Healthcare Center in Wallingford. He was the beloved husband of Ruth S. Caron-Moro for 56 years before her passing in 2004. Lewis was born October 16, 1925 in Ashland, ME a son of the late Frank and Helen O'Clair Moro Sr. He attended Central School and graduated from Ashland High School in Ashland, ME. He proudly served his country in the U.S.Navy during World War II, as Postage Mate Lewis Joseph Moro EM3C, from 1943-1946. After serving in the Navy, Lewis married Ruth Caron-Moro, he was self-employed with a Logging Company, general contractor for the Great Northern. Lewis moved his family to Connecticut in 1963, residing in Meriden with his wife Ruth and their eight children. He then worked for International Silver Company from 1963-1981 as a solderer of silver and pewter wares till the plant closed, Lewis then worked for the House of Pewter as a pewter solderer from 1981 till 2001, when he retired. Lewis is survived by three daughters, Katherine 'Kat' (Chester) Dumont and Dora (Albert) Lavigne all of Meriden and Noreen Thomas of Bristol, five sons;Lawrence (Elisabeth) Moro of NC, Larry(Lise) Moro of FL,Arnold Moro of New Britain,Maurice(Debbie) Moro of Meriden and Lewis (Linda) Moro Jr. of Maine, a brother, Clarence (Edna) Moro a sister Pat (Phil) Leach of Maine. He also leaves 15 grandchildren; Kevin and Scott Moro, Bryan and Allyan George Thomas, Corrin Sullivan, Michelle Geoffrey, Matthew, Timothy and Christopher Moro, Albert, Jennifer and Jason Lavigne, Rea Guckin, Michael Reilly and 15 great-grandchildren as well as many nieces and nephews. He was predeceased by a son, Kenneth Moro a son in-law,George Thomas, a brother Frank(June) Jr. and sisters, Sophie and Jennet. A funeral will be held on Saturday, November 9, 2013 at 9am from the Beecher & Bennett-Flatow Funeral Home, 48 Cook Ave., Meriden followed by a Mass of Christian burial at 11am at Holy Angel's Church, 915 Main St., South Meriden. Burial with Military Honors will follow at Sacred Heart Cemetery, Meriden. Relatives and friends may call at the funeral home on Friday, November 8 from 4-8pm. In lieu of flowers donations in Lewis's memory may be made to Masonic Healthcare Hospice, P.O. Box 70, Wallingford, CT 06492.