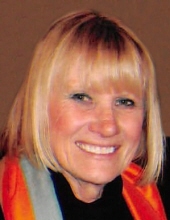 Lina J. Alpert, 79, of New Haven passed away early on July 4, 2019 at her home in New Haven, CT. Lina is survived by her daughter Ona Alpert (Todd Josselyn) of Orange, brother Joseph Mikalavicius (Dyane MacDaniel-Brandt) of Ridgefield, and sister Aldona Cote of North Haven, and is predeceased by her brother John Mikalavicius. She was born in Sestokai, Lithuania on January 29, 1941 to the late Jonas and Ona Pasvenskas Mikalavicius. During WWII, Lina emigrated to the US with her family in 1948 in dramatic fashion, first burying their silverware and china on their property in hopes they would return and then smuggling onto a train at night to escape bombing nearby. After spending time in a Displaced Persons camp in Allied-occupied Germany, Lina and her family finally made it to the boat that would take them to start their new life in the USA. Upon reaching the New York Harbor as a 7-year old via the SS Marine Jumper, Lina was so excited about coming to America that she was willing to sacrifice her favorite doll overboard to the Statue of Liberty. The family eventually settled in Fair Haven where Lina and her siblings had to learn English on the fly. If anybody picked on her younger brothers, Lina was the first to defend them. After school, Lina worked in the banking, and then modeling and fashion industry, and carried a style and cache that even the most chic would take note of. Lina caught the eye of and married her husband of 35 years, the late Abe Alpert, and together they raised their beautiful daughter. They enjoyed wintering on St. Croix, USVI, skiing in Vermont and beachcombing in Florida. Lina was an avid gardener and many passing her home in Westville would comment on her flowers and landscape design. Her eye for beauty continued inside where she entertained with class amongst Asian antiques and other curated items. When it came to decorating, her favorite expressions were 'More is more' and 'The eye has to travel.' Her Christmas Eve dinners were more than simple meals, with each year having a new theme. Always using the best china and silverware, Lina didn't serve you on paper plates, and you didn't come to her house dressed in jeans. She was a great tennis player, playing at the Woodbridge Country Club for years, and enjoyed running 5K races. She was proud of her streak at the New Haven Labor Day road race and had all intentions of keeping her streak going this year, even while sick. Lina was ahead of her time by promoting healthy living and environmentalism before it became trendy. She practiced Earthing, ate organic, and loved trees. Her generosity and philanthropic endeavors have left their mark not only on the local community, but internationally as well. A driving force for a local non-profit, Marycare, she worked tirelessly to raise funds for running water, farming supplies and eventually the construction of a new health center in the village of Ejemekwuru, Nigeria. She was vocal and supportive while volunteering in different capacities at St. Aedan's parish, and never shied away from a fundraising or event planning challenge. Vibrant, beautiful, caring, and kind; a wonderful daughter, wife, sister, aunt, and mother, Lina was a light on this Earth. She truly lived up to her nickname 'Razzle Dazzle.' She will be remembered and missed by all who knew her. Friends are invited to visit with Lina's family on Sunday, July 7th from 4:00 to 7:00 p.m. at BEECHER & BENNETT, 2300 Whitney Avenue, Hamden. Funeral Service will leave from the funeral home at 9:15 a.m. Monday, July 8th for a Mass of Christian Burial to be celebrated at 10:00 a.m. in St. Aedan Church, 112 Fountain St., New Haven. Interment will follow in Northwest Cemetery, Woodbridge.