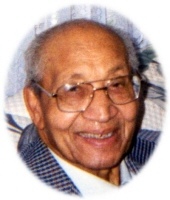 LLoyd Barham, 88, of Hamden, husband of the late Martha Barham, passed away on January 14, 2007 at the West Haven VA Hospital after a short illness. He was born in Franklin, Virginia a son of the late Charlie and Clora English Barham. LLoyd was the devoted father of two daughters Jacqueline Antunes of New Haven and her husband Gerald, and Kimball Barham of Hamden. Grandson Jeremy Antunes of North Haven, and his wife Jocelyn, sister Violet Spearman of CA, and brother Ralph Barham of New Haven. He was predeceased by his sisters Virgie Williams, Mattie Creach, Elsie DeLoatch, and brothers Melvin, Roscoe, James, Henry and Clyde Barham. And a host of loving nieces and nephews. He had been employed at Swift and Company for many years, Winchester Repeating Arms as a machinist for almost 16 years and worked for the State of CT until retirement. He served in the Army Air Corp. in the military during WW II as a construction machine operator. Funeral service Friday, January 18 at 10 a.m. at BEECHER & BENNETT, 2300 Whitney Ave., Hamden. Friends may visit with the family from 9-10 a.m. on Friday. Burial with full Military Honors will take place at Beaverdale Memorial Park.