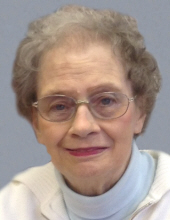 Lois C. Sanderson, 85, wife of nearly 64 years to Rev. Owen J. Sanderson of Hamden, passed away peacefully at St. Raphael's Hospital on Thursday, May 7, 2020. Born in the Bronx, NY September 14, 1934, she was the daughter of the late Frederick W. Hashagen, Sr. and Grace Bell Hashagen. Loving mother of Linda Sanderson of Colorado Springs, CO and Karen (Joseph) Cappucci of Wallingford. Grandmother of David (April) Robertson, Bryan Robertson, Catherine (Michael Marinuzzi) Cappucci, Kimberly (Nathan) Shideler, and Matthew Cappucci. Great-grandmother of Jeffrey and Hailey Robertson. She is also survived by her sister, Doris Beatty of Marietta, GA, and several nieces and nephews. Predeceased by her twin brother, Frederick Hashagen, Jr. Lois graduated from Wittenberg University in Springfield, OH, where she was a member of Alpha Delta Pi sorority and a majorette, and first met her husband Owen while in the marching band together. The two married in 1956 and relocated to Hamden in 1958, where they raised their two daughters and became active members of the community. She was a charter member of Christ Lutheran Church, where she served as a Past President of the LCW Committee. For many years, she worked at the Membership Desk of the Hamden YMCA. As a Bronx native, she was a lifelong fan of the New York Yankees, and also enjoyed watching UConn basketball and the Game Show Network. A loving mother and grandmother, she never missed a school concert, play, or sporting event, and was looking forward to becoming a great-grandmother for the third time this summer. A Memorial Service celebrating Lois's life will be held at a later date. Arrangements are in care of BEECHER & BENNETT FUNERAL HOME, 2300 Whitney Ave., Hamden.