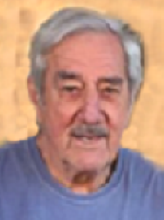 Meriden-Lorenz Leo Zeiser, 89, husband of the late Roberta G. (Godwin) Zeiser, passed away peacefully on Wednesday, March 1, 2017 surrounded by his family. He was born December 6, 1927 in Meriden, the son of the late Paul and Elisabeth (Wittmayer) Zeiser. Lorenz proudly served his country in the U.S. Navy as a Yeoman Second Class, then returned home and joined his father at Zeiser's Barber Shop, until he retired in 1999. Lorenz was a member of St. Andrew Episcopal Church where he was involved in many church activities. The family would like to thank the doctors, nurses, and staff at MidState Medical Center, Gaylord Specialty Healthcare, and Coccomo Healthcare for their care and compassion. He is survived by four children and their spouses; Debra and John Stephen of Meriden, Loren and Gary Dickens of Bristol, Martin and Karen Zeiser of Meriden, and Lisa and Steve Bartlett of Leesburg, GA; six grandchildren, Scott Dickens and his wife Sara Tremblay of Willimantic, Christopher and Juliette Dickens of Bristol, Stephanie Zeiser of Anderson, SC, Eric Zeiser of Meriden, Whitney Bartlett of Leesburg, GA, and Brandi Wright of Mableton, GA. He also leaves three great-grandchildren; Noah, Chloe and Alexandrine Dickens, a brother-in-law and sister-in-law, Frank and Audrey Godwin of Portland, CT, along with his niece and nephews. Lorenz also leaves behind many close friends. A Memorial Service honoring Lorenz's life will be held on Saturday, March 18, 2017 at 11:30am at St. Andrew Episcopal Church, 20 Catlin St., Meriden. Burial will be private at the convenience of the family. In lieu of flowers donations may be made to St. Andrew Church Food Pantry, 20 Catlin St., Meriden, CT 06450. The Beecher & Bennett-Flatow Funeral Home, 48 Cook Ave., Meriden has been entrusted with the arrangements. To send a condolence, please see obituary at www.beecherandbennett.com.