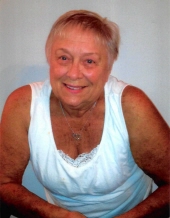 Lorraine M. O'Donnell, age 83, of Hamden, passed away peacefully on March 5, 2016 at the Hamden Health Care Center surrounded by her family. Lorraine was born in Riverhead, NY on December 29, 1932, a daughter of the late Stanley Tryon & Marion (Malkowitz) Tryon. She was the widow of George J. O'Donnell. Lorraine is survived by her sons, George T. (Pamela) O'Donnell of North Haven and Kevin J. (Joan) O'Donnell of Branford; her daughters, Karen 'Kerri' (Christopher) Stephenson of New Hampshire, Katherine O'Donnell Knowles of Winter Park, FL, Eileen (William) Valintas of Wallingford and Maureen (Peter) Panaroni of Hamden; sisters, Carol Carey, Marion Prendegast & Florence Kull all of Riverhead, NY; 18 grandchildren and 8 great-grandchildren. Lorraine was employed as a Business Manager in the Department of Economics at Yale University from 1976 until her retirement in 2000. She was a past President of the Mothers of Twins Club, an area Girl Scout Leader and a member of the Red Hat Club of Hamden & North Haven. Lorraine loved to play the accordion; she was an avid sewer, knitter and gardener. Lorraine enjoyed living in Florida for the past 3 years before returning to CT because of her health. She cherished spending time with her children, grandchildren and great-grandchildren. Lorraine's funeral and burial were private. Arrangements were in care of BEECHER & BENNETT FUNERAL HOME, 2300 Whitney Ave, Hamden. Contributions in Lorraine's memory may be made to: Lewy Body Dementia Association, 912 Killian Hill Rd, S.W. Lilburn, GA 30047.