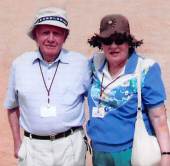 Louis Joseph Quarterman, 90, of North Haven, beloved husband of Dorothy Mott Quarterman passed away on March 9th, 2016. Louis was born on August 18, 1925 in St. Louis, MO, the son of the late Morris & Mary Joseph Quarterman. He is survived by his children, Jay and his wife Mary Quarterman of Seattle, WA, Linda Quarterman of Eldora, CO, Jennifer Quaterman and her husband Denny Hobson of Flagstaff, AZ, Ned and his wife Christina Quarterman of McHenry, IL; 6 grandchildren, and 3 great-grandchildren. He is also survived by his sister, Barbara deWitt of Riverside, CA, and his former wife, Mrs. Jane Sparkman Miller of Genoa City, WI. He was predeceased by his mother-in-law Elizabeth Mott, to whom he was very devoted. Louis served in WWII with the 8th Air Force in England as a tail-gunner on a B-24 Bomber named 'Little Beaver.' Dorothy & Louis met in London while on vacation, and visited many countries of the world together. Dorothy was his true soulmate and love of his life. In addition to his love of travel, he enjoyed sailing, gardening, and being outdoors. He was also a collector of antiques. Special thanks to our doctor, Dr. Marc Mann, who helped us through all of our adversities. 'No sassing in heaven, and we'll see you there Big Daddy.' Relatives and friends are invited to attend a graveside service with military honors at 10:00 a.m on Saturday, March 12, 2016 at Centerville Cemetery, Hamden. To share a memory with Louis' family, please visit www.beecherandbennett.com.