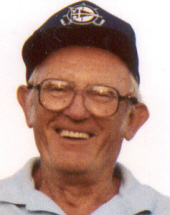 Louis (Lou) Thomas Benton, Jr., age 92, of Orange and South Fort Meyers, FL, beloved husband of the late Hertha Edna Benton, (8/1/2009), died peacefully at home surrounded by his loving family, on April 9, 2010 following a brief illness. Mr. Benton was born in Hartford, CT October 28, 1917, the son of the late Anna Eschholz and Louis T. Benton and was a resident of Orange for 62 years. He loved boating and was one of the Founding Fathers of the Valley Yacht Club in Devon of which he served as Vice-Commodore from 1971-1972 and Commodore from 1973-1974 and 1978-1980 and also served as treasurer from 1967-1970 and 1981-1996. In recognition of his 40 years of generous commitment of time, support and inspiration, he was the first club member to be inducted into the Valley Yacht Club Dock of Fame in 2007 and the south pier is now known as Benton Pier. His interest as a charter member never waned in his later years, still attending club functions and always checking up on how events were progressing. He was known for his 'Top of the Morning to You' greeting and his love for a HARDY handshake. Mr. Benton served as a Metallurgical Engineer with the former Acme Wire and Whitney Blake Companies, retiring in 1982. He is survived by his son, Louis T. Benton, III of Lake Helen, FL.; daughters, Hertha Russell of Woodbridge, Gerrie Amendola and her husband Genaro of East Haven, Barbara Thomas and her husband James of Orange, Judith Johnson of Orange, and Sandra O'Donnell and her husband Robert of FL; 5 grandsons; 4 granddaughters; 6 great-grandsons; 6 great-granddaughters; brothers, Norman Benton and his wife Doris of Woodstock, George Benton and his wife Daphne of NJ; sister, Alma Everett of FL. In addition to his beloved wife, he was predeceased by sons-in-law Robert D. Russell and Charles P. Johnson; infant great-grandson, Michael Farah; a very special cousin, Edward Miller and Sharon Lynn Russell, beloved wife of grandson Robert d. Russell, Jr. A Funeral Service will be held at BEECHER & BENNETT- TAYLOR FUNERAL HOME, 410 Campbell Ave., West Haven on Thursday, April 15th at 9:00 a.m. Burial will follow in Orange Center Cemetery, Orange. Friends may visit with the family on Wednesday evening from 5:00 to 8:00 p.m. at the funeral home. Donations in Lou Benton's name may be sent to the Valley Yacht Club, c/o James Manzolli, Commodore, P.O. Box 2164, Devon, CT 06460.