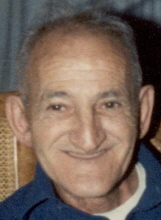 In West Haven, Wednesday, July 2, 2008, Louis N. Klicin, 86 of Milford. Husband of the late Mary Carlene Hawkins Klicin, Louis is survived by a daughter, Paula Ridgway and her partner Louise Bodnar of Milford, a grandson, Tracy Ridgway and his wife Barbara, three great-grandchildren, Casey, Jesse and Melissa Ridgway all of West Haven and a sister Helen Traggianese of Bridgeport. In addition to his wife, Louis was predeceased by a brother, George Krekan. A son of the late George and Emma Ellis Klicin, Louis was born in Scalp Level, PA on December 13, 1921. He served in the US Army for 30 years during the WW II and the Korean War, retiring in 1965. He was a tool and die maker at Sikorsky Aircraft, retiring in 1984 after 23 years. He attended Gateway Christian Fellowship Church of West Haven. A graveside service with military honors will be held Tuesday, July 8 at 1 pm at Oak Grove Cemetery in West Haven. Arrangements under the direction of BEECHER & BENNETT-TAYLOR FUNERAL HOME, 410 Campbell Ave., West Haven. Contributions in Louis' name can be made to Gateway Christian Fellowship Bethany Hands, 450 Island Lane, West Haven, CT 06516.