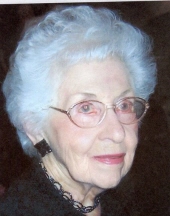 LOUISE GIANNINI Louise M. Giannini, 94, wife of the late William T. Giannini of 18 Tower Lane, New Haven, passed away March 7, 2008 after a brief illness. Mrs. Giannini was born in New York City May 7, 1913, a daughter of the late Abraham and Fannie Victor Mendelsohn and resided in New Haven since 1990. She was employed at Bronx Community College as a Administrative Assistant prior to her retirement. Mrs. Giannini is survived by her loving children, Dorothy Giannini-Meyers and her husband Steven Meyers of Orange, Thomas Giannini and his wife Sandra of Tucson, AZ, Donald Giannini and his fiance Lisa Piquette of Naugatuck, a sister Claire Hammer of Minneapolis, MN, and a brother Harold Mendelsohn of San Rafael, CA. She is also survived by her cherished grandchildren, Janet, Frank, Carol, Lisa, Nicole, and Gregory, and her beloved great grandchildren Katie, Nicholas, Matthew, Tyler, Celia, and Michael. Funeral service will be Friday, March 14 at 11 am at BEECHER & BENNETT, 2300 WHITNEY AVE., HAMDEN. Friends may call Thursday from 4-8pm. Interment in Carrington Cemetery, Bethany. The family will be receiving condolence calls at the home of Dorothy and Steven Meyers, 863 Garden Road in Orange on Saturday evening at 7 p.m. and Sunday 2 to 4 in the afternoon and 7 p.m. Contributions in her memory may be sent to Tower One, 18 Tower Lane, New Haven, CT 06519.